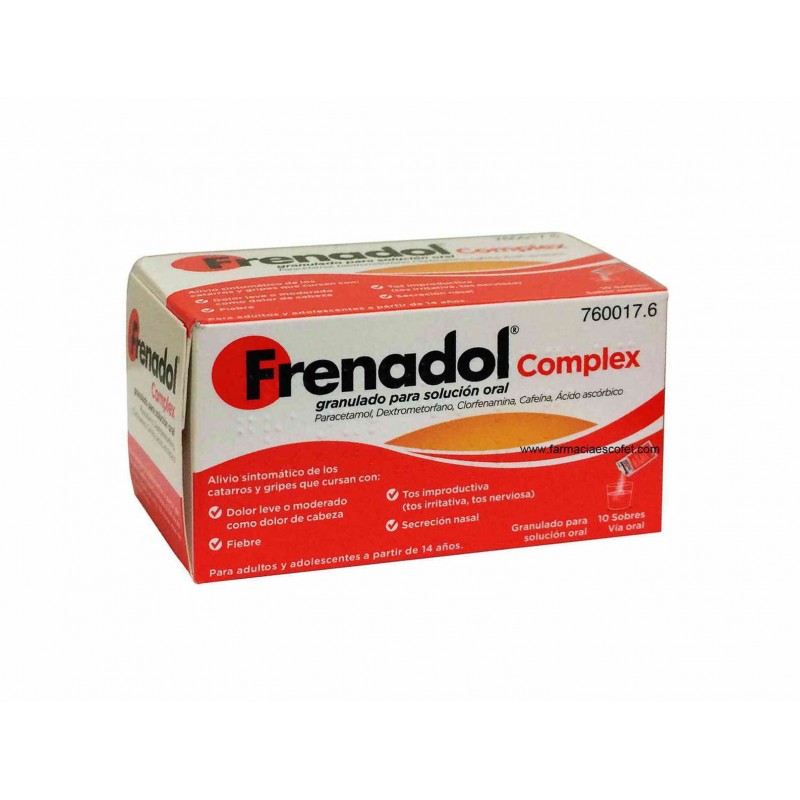 What FRENADOL Complex is and what it is used for

FRENADOL ™ Complex is an association of paracetamol that reduces fever and relieves pain, dextromethorphan which is an antitussive, chlorphenamine that helps reduce runny nose and caffeine that counteracts the decline that usually accompanies the common cold. It also contains ascorbic acid or vitamin C.

This medicine is indicated for the symptomatic relief of colds and flu that present with mild or moderate pain such as headache, fever, unproductive cough (irritative cough, nervous cough) and runny nose for adults and adolescents from 14 years of age.

You should consult your doctor if it worsens or if symptoms persist after 5 days of treatment in adults or 3 days in adolescents or if fever persists for more than 3 days.

How to take FRENADOL Complex

The recommended dose is:

Adults and adolescents from 14 years old: 1 every 6 or 8 hours (3 or 4 times a day), as needed. Do not take more than 4 sachets (equivalent to 2.6 g of paracetamol) per day. See section "Warnings and precautions".

Always use the lowest dose that is effective.

Patients with liver failure: 1 out of every 8 hours. Do not take more than 3 sachets (equivalent to 1.95 g of paracetamol) per day. Check with your doctor.

Patients with kidney failure: They cannot take this medicine due to its paracetamol 650 mg content.

Use in children and adolescents

This medicine is contraindicated in children under 14 years, due to the dose of its active ingredients.

Use in elderly patients

The elderly cannot use this medicine without consulting a doctor.

This medicine is taken orally

Pour the contents of an envelope into half a glass of water and stir its contents until it is dissolved.

The medication should be started when the first symptoms appear, as they disappear, the medication must be stopped.

If you take more FRENADOL Complex than you should

Go to a medical center immediately even if there are no symptoms since they often do not manifest until 3 days after ingestion of the overdose, even in case of severe poisoning.

Other symptoms in case of massive overdose can be: coma, severe respiratory problems and seizures.

Taking very high amounts of this medicine can produce a state of drowsiness, nervousness, nausea, vomiting or abnormal gait.

There have been cases of abuse with drugs containing dextromethorphan in adolescents, and serious adverse effects may appear, such as tachycardia (acceleration of the heartbeat), lethargy, hypertension or hypotension (high or low blood pressure), mydriasis (dilation of the pupil of the eye), agitation, vertigo, gastrointestinal upset, hallucinations, sputtering, nystagmus (uncontrolled and involuntary movement of the eyes), fever, tachypnea (shallow and rapid breathing), brain damage, ataxia (uncoordinated movements), seizures, respiratory depression, loss of consciousness, arrhythmias (irregular heartbeat) and death.

The treatment of overdose is more effective if it starts within 4 hours after taking the medicine. Patients on barbiturates or chronic alcoholics may be more susceptible to the toxicity of a paracetamol overdose.

In case of overdose or accidental ingestion, immediately go to a medical center or if it is not possible, consult the Toxicological Information Service (telephone: 91 5620420), indicating the medicine and the amount ingested.