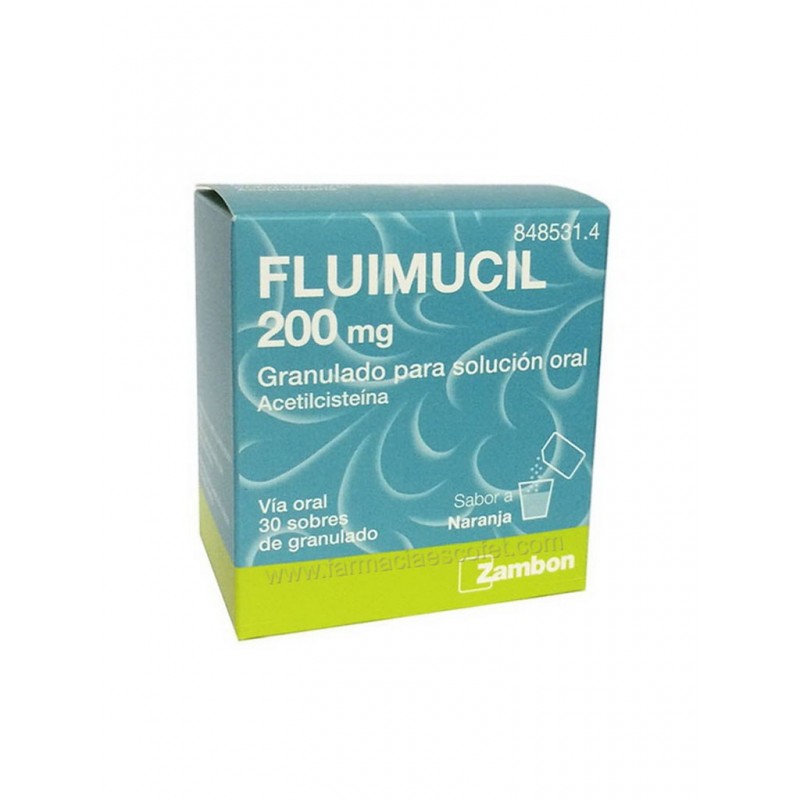 Mucolytic: it reduces the viscosity of bronchial secretions, promoting their elimination

Action and how Fluimucil 200 mg 30 sachets works
- Fluimucil is a mucolytic medicine. Is N-acetylated derivative of cysteine amino acid. It reduces the viscosity of bronchial secretions, promoting their elimination, probably due to the presence of a free thiol group. This group is capable of breaking the disulfide bonds that keep the tridimensional structure of mucoproteins, which results in secretion fluidization. Its effects are pH-dependent, being maximum at pH 7-9.

RULES FOR THE CORRECT ADMINISTRATION:
The total dose may be administered in a single daily, or divided into three doses taken.
The contents of the envelope or effervescent tablets should be dissolved in a glass with a little water. The solutions can be ingested directly dosed once. The orodispersible tablets are introduced into the mouth, dissolving with saliva. He then swallow.
It is recommended to drink plenty of water during treatment, to further the effects of acetylcysteine.

Contraindications
Hypersensitivity to any component of the medication.

Precautions
- Severe liver failure, liver cirrhosis. In these patients, the clearance may be decreased, resulting in increased risk of adverse reactions, so it is recommended to closely monitor the patient to the risk of adverse reactions anaphylactic.
- Ulcer Petica. Acetylcysteine sometimes can lead to nausea and vomiting, especially at high doses, and therefore there was an increased risk of gastric bleeding. Furthermore, it has also been postulated that acetylcysteine result in increased fluidity gastric mucus, resulting in a decrease of the protective action thereof. It is recommended caution in patients with peptic ulcer.
- Asthma. In asthmatic patients with severe respiratory failure or those with diseases associated with bronchial spasm, increased fluidity of secretions may lead to obstruction of the airway if the expectoration is not adequate. It is recommended therefore exercise caution.
- Increased expectoration. At the beginning of treatment, you may see an increase in expectoration, due to increased fluidity of secretions. This effect decreases after several days of treatment. If symptoms persist or worsen after five days of treatment, it is advised to reevaluate the clinical situation.

WARNINGS EXCIPIENTES:
- This medicine contains aspartame as an excipient, which must be taken into account by people with phenylketonuria. 100 mg Aspartame 56.13 mg corresponding to phenylalanine.

ADVICE TO THE PATIENT:
- It is recommended to drink plenty of water during treatment.
- The preparation may have a slight sulfurous, characteristic of the active ingredient and not an alteration of the preparation odor.
- It should be noted doctor if a generalized itching appears by the body.
- If after five days, the symptoms continue or worsen, it is advisable to see a doctor.
SPECIAL CONSIDERATIONS:
- In case of generalized urticaria or other allergic symptoms, it is recommended to discontinue treatment.

Interactions
- Antibiotics. Acetylcysteine could be incompatible with amphotericin B, ampicillin sodium, cephalosporins, erythromycin lactobionate or some tetracyclines. It is recommended to separate the take at least an interval of two hours.
- Antitussives. Acetylcysteine increases the fluidity of bronchial secretions, so it is not advisable to administer along with antitussives, which could inhibit the cough reflex and lead to pulmonary obstruction.
- Inhibitor medicines bronchial secretion (anticholinergics, tricyclic antidepressants, H1 antihistamines, anti-Parkinson, MAO inhibitors, neuroleptics). They can antagonize the effects of acetylcysteine.
- Nitroglycerin. Acetylcysteine may potentiate the vasodilatory effects of nitroglycerin and adverse to very high doses (100 mg / kg) reactions.
- Metal salts. Acetylcysteine could present certain chelating effects of some metals such as gold, calcium or iron, which would reduce its absorption. It is recommended distance making mineral supplements and acetylcysteine at least two hours.

Pregnancy
Category B FDA. Administration of 500 mg / kg / 24 hours orally or nebulization acetylcysteine and isoproterenol for 30-35 minutes in pregnant rabbits showed no teratogenicity. The peri and post-natal studies also failed to find evidence of fetal harm or the newborn. Acetylcysteine appears to cross the placental barrier. There have been no adequate and well-controlled studies in humans, so the use of this medicine only accepted if no safer therapeutic alternatives.

Lactation
It is unknown whether acetylcysteine is excreted in milk, and if this could affect the child. It is recommended to stop breastfeeding or prevent the administration of this medicine.

Children
No specific problems have been reported in this age group. Use accepted.

Elderly
No specific problems have been reported in this age group. However, in these patients it is usually more common the presence of hepatic or respiratory failure, so it is recommended to be used with caution acetylcysteine.

Effects on driving
Acetylcysteine does not usually lead to phenomena of sleepiness, but exceptionally described some cases. Caution is advised when driving, to be the relative certainty that the treatment does not adversely affect the patient's ability.

Adverse reactions
Adverse reactions of acetylcysteine are rare, mild and transient. The most common adverse reactions are:
- Digestive. Sometimes nausea, vomiting, diarrhea and gastric hyperacidity, especially when used at high doses may appear.
- Liver. There have been some cases of increased transaminase levels following administration of large doses of acetylcysteine, which reversed after a few days of stopping treatment.
- Neurologic / psychological. They described some cases of headache, tinnitus, somnolence.
- Respiratory Tract. Usually exclusive administration by inhalation. rhinorrhea, bronchitis, hemoptysis, tracheitis and bronchial spasm may occur.
- Eyepieces. Blurry vision.
- Allergic / Dermatological. After 30-60 minutes of administration, hypersensitivity reactions that occur with generalized urticaria, mild fever, itching, rash rash, dyspnea, angioedema and hypotension may occur. These reactions are more frequent and severe in the case of parenteral administration, can be fatal, while oral or inhalation is rare to occur.
In case of allergic reactions, it is recommended to temporarily discontinue treatment and administer antihistamines H1, and if necessary, adrenaline. If the allergic reaction is repeated, it should be withdrawn and not start again.
- General. Excessive sweating.

Overdose
Symptoms: Acetylcysteine has been administered in man at doses up to 500 mg / kg / 24 hours without causing side effects, so it is possible to exclude the possibility of poisoning by overdose of this active ingredient. However, in case of massive ingestion, the appearance of an intensification of the adverse effects are expected, mainly gastrointestinal.
Treatment: resort to symptomatic treatment. the airway clear of secretions, resting the patient and keep practicing bronchial aspiration. If deemed necessary, and have no more than 30 minutes after ingestion, gastric lavage is performed. 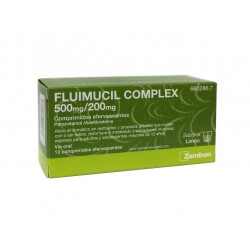 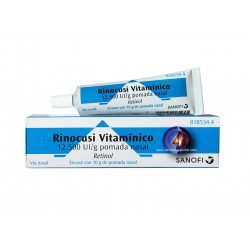