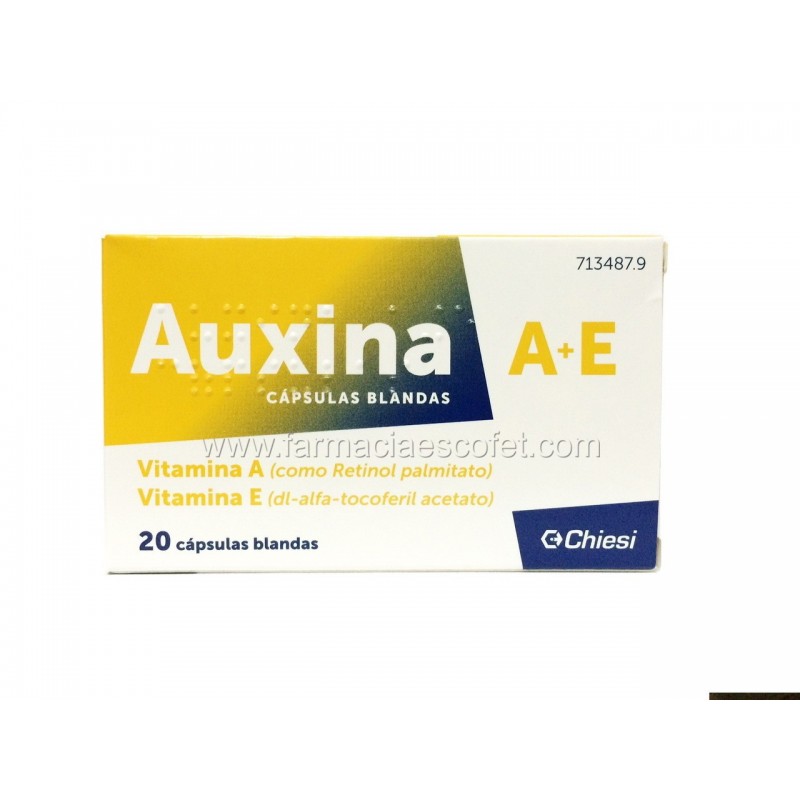 Treatment of deficiency of vitamins A and E caused by poor diet, convalescence or other reasons; to encourage the general condition of vision, skin, mucous membranes and defenses.

What is Auxina A + E capsules and what is it used for?
Contains fat-soluble vitamins A and E.
Vitamin A acts on a large number of important functions in the body; It is necessary, among other processes, for vision, skin integrity, bone development and for the body's defenses.
The best known function of vitamin E is its ability to act as an antioxidant substance in fats, preventing the spread of free radical reactions.

The recommended dose is:
Adults and children over 14 years:
You should consider your vitamin A intake also through your diet to prevent dose accumulation.
It is recommended to take 1 capsule a day. In some cases, your doctor may tell you to take 2 or up to 3 capsules a day.
If symptoms worsen or do not improve after 10 days of treatment, you should see a doctor.
In general, the treatment should not exceed two weeks but, at the discretion of your doctor, it could take longer.
Orally.
The capsules should be taken with the help of a little water or another liquid, preferably during meals.

Use in children and adolescents
Children under 14 years of age should not take this medicine due to its doses.

If you take more Auxina A + E than you should
If you have taken more Auxin A + E than recommended in this leaflet or by your doctor (high doses), vitamin A toxicity may appear. Within a few hours after administration of an overdose of vitamin A symptoms such as: irritability, drowsiness, seizures, headache, increased pressure inside the head, nausea, vomiting, diarrhea, visual disturbances, and nervous disorders; days after overdose, redness and peeling of the skin, bleeding gums, etc. may appear.
Hypervitaminosis A can occur with continued (chronic) vitamin A over time. The risk of toxicity is greater if you have kidney or liver disease, are underweight or malnourished, or if you consume alcohol; You may suffer: fatigue, irritability, psychic disturbances, lack of appetite, digestive upset, mild fever, children can stop gaining weight normally; hair loss, skin rashes, dry mucosa; other symptoms are liver abnormalities with altered liver test test results and even permanent liver damage. Other symptoms include: disturbances in urination (urination) and blood test counts, and calcifications (nodules) in tendons, muscles, and tissue under the skin.
Vitamin E in excessive doses rarely causes nausea, diarrhea and other intestinal disorders and in predisposed people it can produce thrombophlebitis and aggravate coagulation problems; It can also cause malfunctions of the gonads (sex glands), breast pain, increased cholesterol and triglycerides, and decreased thyroid hormones in the blood.
Hypervitaminosis A is usually reversible and symptoms improve within a few days of stopping treatment. Symptoms of excessive doses of vitamin E generally disappear after discontinuation of treatment.
In case of overdose or accidental ingestion, immediately consult your doctor or pharmacist, or go to a medical center or call the Toxicology Information Service, telephone 91 562 04 20, indicating the medicine and the amount ingested.

If you forget to take Auxina A + E
Do not take a double dose to make up for a forgotten dose.

If you have any further questions on the use of this medicine, ask your doctor or pharmacist.